Mining disturbs land, changes ecosystems and alters biodiversity. While we have long history of reclaiming lands after mining, we know that further progress can be made. That’s why, in 2011, we established a long-term vision of achieving a net positive impact on biodiversity in areas affected by our activities. For Teck, Net Positive Impact (NPI) means that ecosystems and biodiversity are better off at the end of mining than when we found them. Working towards NPI happens throughout the mining life cycle, and it starts with determining the key elements and pre-mining baseline.

Defining Ecosystem and Biodiversity Elements and Determining a Baseline

Our operations and sites use quantitative metrics to demonstrate NPI on beneficial, valued and sustaining Ecosystem and Biodiversity Elements (called “the Elements” in the rest of this case study) that are relevant to their mines. These Elements include natural habitats and ecosystems, priority landscape functions, highly threatened and/or vulnerable populations of plants and animals, and ecosystems (both sustaining and valued by stakeholders and Indigenous Peoples). In addition to other resources such as water, these Elements are a type of natural capital. The baseline against which an operation’s impacts are measured is the “pre-mine” condition, even if the mine is currently in operation, and has been for a long time. In general, our sites are working to achieve NPI by following a mitigation hierarchy with the following steps: avoid, minimize, rehabilitate, implement offsets and monitor results, as well as additional conservation activities.

Creating and Implementing a Plan for Net Positive Impact

A biodiversity management plan is a high-level document that describes a site plan for achieving NPI. As part of developing a biodiversity management plan, each site and operation develops a workbook for tracking the Elements described above. The workbook is a type of ledger that tracks potential effects, mitigation actions, and associated engagement with stakeholders and Indigenous Peoples.

The commitments identified in the plan are integrated into internal reporting systems. A biodiversity management plan is a live document that is updated on average once per year. Updates to the plan often reflect the results of studies being conducted towards developing a full mitigation plan, the results from monitoring of the effectiveness of mitigation actions, changes to applicable regulations, or changes in the conservation status of different types of biodiversity components.

When monitoring and reporting on achieving NPI through the biodiversity management plan, many sites at Teck use a Pressure-State-Response framework below. The three types of indicators within the framework are:

Together, these three types of indicators capture the causal link between Teck’s impacts (pressure), mitigation measures (response) and biodiversity outcomes (state), and present a complete framework for the monitoring and adaptive management of Teck’s biodiversity control and mitigation measures. This framework guides our approach to achievement of our goal of having a net positive impact.

Learn more about our biodiversity performance in our 2018 Sustainability Report. 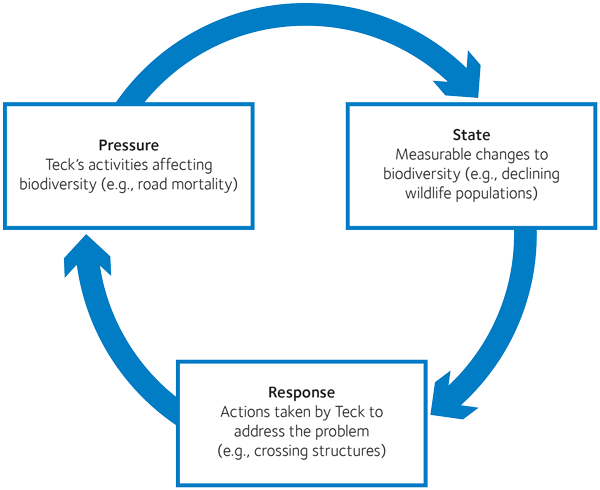