Teck's tailings facilities are operated and maintained to meet global best practices for safety throughout their life-cycle. Whether in operation or in a state of safe closure, we continually review our facilities and procedures and are committed to maintaining the highest standard of safety at our operations.

Tailings management is one of our eight strategic themes along with: health and safety, climate change, our people, water, responsible production, communities and Indigenous Peoples, and biodiversity and reclamation. Our sustainability strategy has long-term strategic priorities and shorter-term sustainability goals.

MANAGEMENT AND PERFORMANCE IN TAILINGS

Brief summaries of our management approach and annual performance related to tailings management are provided with the following links with additional information following below. 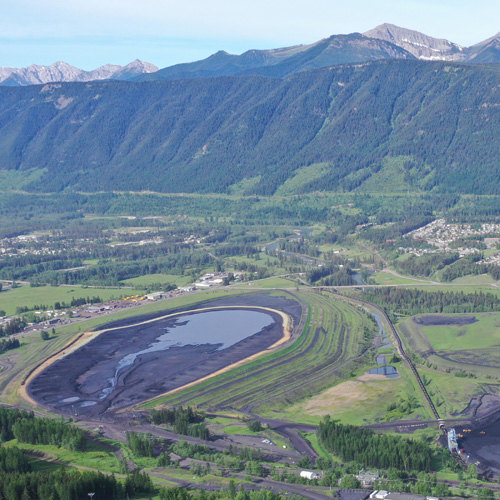 Tailings are a common by-product of the mining process. They are typically created as mined ore is crushed, ground and/or processed to separate the valuable minerals and create a saleable concentrate product. The waste from this process is called tailings. Due to the nature of the ore separation processes, tailings are commonly in the form of a slurry of fine mineral particles and water. Management of tailings involves storage in a specially-designed impoundment called a tailings facility.

Tailings facilities are historically well-managed with very few incidents; however, there have been incidents and from these we know that a tailings incident has the potential to have a significant impact on communities, local economies and the surrounding environment. As such, we take extensive measures during planning, design, construction, operation and decommissioning of our tailings facilities to confirm that:

In August 2020, the first global standard for tailings management, the Global Industry Standard on Tailings Management (GISTM), was launched jointly by the ICMM, the United Nations Environment Programme and the Principles for Responsible Investment. The standard sets a high benchmark for improving the safe management of tailings facilities, and supports the ultimate goal of zero harm. Teck was part of the advisory group that provided input to develop the new standard, and we were actively involved with the development of the ICMM Good Practice Guidance and Conformance Protocol; both documents to assist with implementation of the GISTM.

Teck is committed to implementation of the GISTM across our operating and legacy (closed) facilities in all jurisdictions. All of our active tailings management facilities will be operated in conformance with the Standard by August 2023.

More information on the GISTM is available here.

Tailings facilities can follow a number of designs, based on factors including the composition of the tailings being stored, geotechnical considerations, precipitation/climate, seismic activity, community preference, and environmental protection. Across Teck’s operations are examples of numerous types of tailings facilities, including facilities for storing dewatered “dry stack” tailings at our steelmaking coal operations and in-pit storage utilizing existing mined-out pits. The most common form of tailings impoundment at Teck and across the mining industry is created by constructing an engineered embankment (or embankments, also referred to as dams) in conjunction with natural topography to create a tailings storage facility.

There are several primary methods of constructing tailings embankments. The specific construction method, or combination of methods, for each of our tailings facility is chosen based on the factors above, with the first priority being the safety and security of communities, employees and the environment.  Tailings facilities are most often developed in stages over the operating life with a series of facilities “raises”.  Within the construction methods available are three basic geometries defined by how the crest of the embankment moves during successive raises of the facility relative to the original “starter embankment” at the outset of the tailings facility’s development.

Upstream
Upstream construction begins with a starter embankment constructed at the toe of the facility. The tailings are then discharged into the facility where they form a tailings beach. This tailings beach, which can be compacted/controlled, is then used to form the foundation for subsequent levels of the wall as the facility is raised. As such, the crest of the embankment moves upstream with each raise.

Centreline
In Centreline construction, the embankment is raised vertically from the starter embankment. The crest therefore remains fixed relative to upstream and downstream directions as the facility is sequentially raised. Unlike the upstream geometry, the embankment wall does not used beached tailings for foundation support.

Downstream
Downstream designs start with a starter embankment similar to the other two construction methods. Tailings are then discharged into the facility and as the embankment is raised, each new wall is constructed and supported on top of the downstream slope of the previous section, so the crest moves downstream with each raise. Like the Centerline construction, the embankment wall does not rely upon beached tailings for wall support.

Single Stage
A single stage embankment is built to full height in one stage with no further raises. This design is most commonly used for smaller tailings facilities.

We also have non-operated joint venture interests with tailings facilities at Antamina in Peru and Fort Hills in Alberta.

Many sites include multiple tailings facilities, which are often a mix of active and inactive facilities.

Download a full list of the tailings facilities Teck manages, including information on construction type and location. 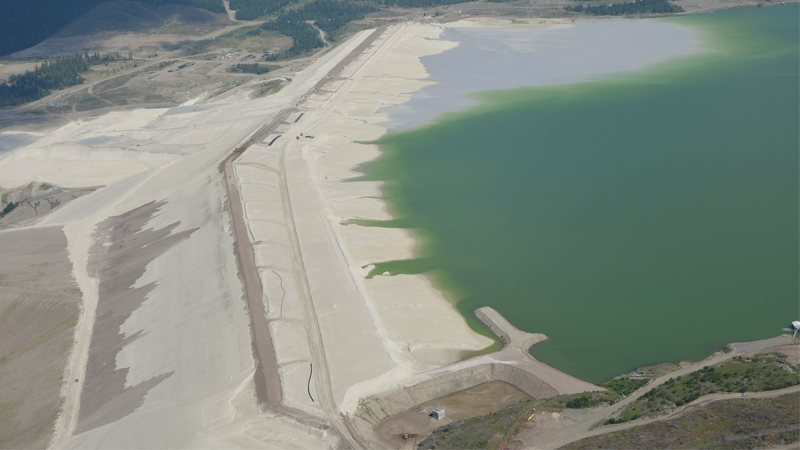 Teck operates and maintains our tailings facilities to meet global best practices for safety including industry leading protocols established by the International Council on Mining and Metals (ICMM) and the Mining Association of Canada (MAC). These leading protocols are augmented with best practice technical guidance from the Canadian Dam Association and the International Commission on Large Dams which Teck also takes into consideration for its overall governance program.

2. Staff Inspections: Tailings facilities are inspected by trained operators and expert technical staff as frequently as several times daily, with formal staff inspections at our operations at least once per month.

4. Detailed Third-Party Reviews: Comprehensive third-party safety reviews are conducted by a qualified independent tailings reviewer as frequently as every three years, based upon the potential consequence for each facility.

All Teck facilities with credible failure modes and/or any appreciable potential consequence have a detailed Operations, Maintenance and Surveillance manual and Emergency Preparedness and Response Plan, which are both regularly reviewed and updated. We also review Emergency Response plans with our local communities and stakeholders and undertake community meetings and emergency drills to work through these plans and discuss our approach to tailings management.

For all high-consequence facilities with credible failure modes, a formal inundation study is conducted to identify any potentially impacted communities and waterbodies in the extremely unlikely event of a tailings incident, in order to evaluate design/mitigation strategies and to assist with emergency planning and response.  Teck’s programs exist to reduce the likelihood of such events to negligible.

In evaluating potential consequence, Teck bases its evaluation upon the potential environmental, safety and economic effects of a failure. This ranking does not reflect likelihood of failure, but rather provides a tool to assist with facility design and emergency planning.

Teck is committed to being open and transparent with communities and other stakeholders regarding the construction and management of our tailings facilities. One of the most important pieces of information for each tailings facility is the Annual  Facility Performance Report (AFPR).  Formerly termed a Dam Safety Inspection (DSI), an AFPR is conducted annually for each tailings facility by the third-party Engineer of Record. The AFPR is a detailed examination of the facility and related infrastructure with the purpose of identifying any conditions or changes that might impact the safety and reliability of the structure and to make recommendations where any issues warranting attention are noted. Teck tracks the recommendations and works with the Engineer of Record to address each item in a timely manner.

Teck does not discharge tailings to rivers or oceans.

While we are confident in the safety and security of our tailings facilities, we are committed to continually reviewing our facilities and procedures to maintain the highest standard of safety at our operations. As such, following the tailings failure at the Mt. Polley Mine in British Columbia, Teck undertook an independent evaluation of all facility foundations outside of our already comprehensive review process.   Following both the Samarco and Feijão (Brumadinho) failures in Brazil, we initiated special reviews of our tailings facilities and procedures. These reviews include external experts who were independent to any aspect of the design or operation of any of our facilities.   These reviews confirmed Teck’s programs to be industry leading and comprehensive but also identified areas for continual improvement which we have embedded into our overall governance program.

In addition to Global Tailings Standard (GISTM), we also work in partnership with numerous local, national and international organizations to support improvements in tailings and mine waste management across our industry, including:

Download this table for additional detail on each tailings facility with dam(s) managed by Teck at both our active operations and legacy sites.

Annual Facility Performance Reports (AFPRs), formerly Dam Safety Inspections (DSIs), are one of the measures in place for the safe management of our tailings facilities. AFPRs are conducted each year by a third-party Engineer of Record for mine tailings facilities in order to summarize the past year’s information into a concise review documenting the safe operation, maintenance and surveillance of the facility and to identify and make any recommendations for continual improvement. As described above, these summaries are often required by some of the jurisdictions that Teck operate but Teck takes this approach of performance review and documentation regardless of where a facility is located.

Follow link for AFPRs for Teck’s tailings facilities by operation. 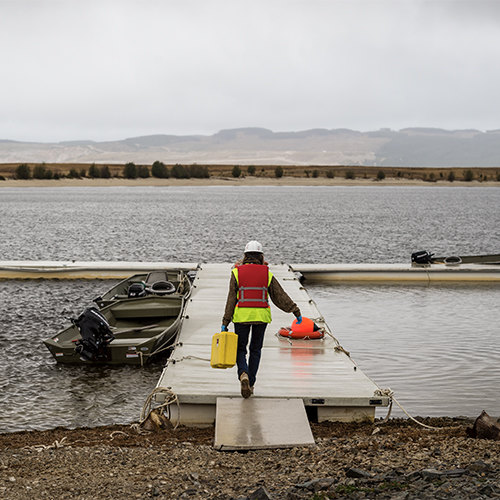 In response to a request from the Investor Mining & Tailings Safety Initiative, chaired by the Church of England and Swedish Council on Ethics for the AP Funds, Teck has provided specific details and information regarding our tailings facilities and our approach to tailings management. We are committed to working with stakeholders and being open and transparent on this important issue.