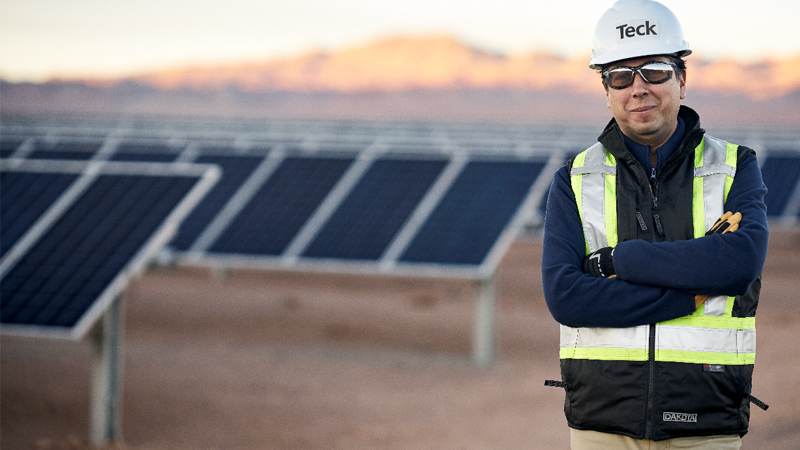 Decarbonizing our Operations in Chile with Renewable Energy

Reducing emissions at our operations requires that we move away from higher carbon sources of energy, and in the case of electricity, low-cost and low-carbon energy increasingly go hand in hand.

At Teck’s Chilean operations, where the majority of electricity is currently generated by conventional sources like coal and natural gas, increasing our use of renewable energy brings opportunities to greatly reduce greenhouse gas (GHG) emissions, while creating potential for long-term savings on energy costs.

In 2020, we set ambitious goals for our Chilean operations - to procure 50% of our electricity from clean energy by 2025, and 100% by 2030. These goals and others act as short-term milestones towards our aspiration to achieve carbon neutrality by 2050.

At Teck’s Quebrada Blanca Phase 2 project (QB2), work is already underway to achieve these goals. In early 2020, QB2 restructured part of its power agreement with AES Gener to increase the project’s use of renewable energy to 118 Megawatts (MW) starting as early as 2022.

Once effective, more than 50% of QB2’s total operating power needs will be from renewable sources, including wind, solar, and hydroelectric energy. This agreement secures reliable, long-term power for our major copper growth project at no additional cost, while helping to reduce our environmental footprint.

The switch to renewable power displaces previous fossil fuel power sourced for QB2 and will eliminate approximately 800,000 tonnes of greenhouse gas (GHG) emissions annually – the equivalent of taking 170,000 combustion engine cars off the road. This is equal to permanently parking more than half of all the cars in the City of Vancouver or all the cars in the Tarapacá Region of Chile where QB2 is located.

This new agreement builds on Teck’s existing renewable energy contract with AES Gener to supply 21 MW of energy from AES’ Andes Solar plant, which was the first contract of its kind in the mining sector in Chile. Looking ahead, Teck will build on this progress by continuing to increase the amount of contracted renewable power to reach our 100% target by 2030 in Chile.

In addition to increasing our use of renewable energy sources, Teck is also focused on growing our production of copper, a material critical to the low carbon economy. For example, renewable energy systems, like solar, can require 10 times more copper than traditional energy systems, and zero-emission electric vehicles need up to four times as much copper as an internal combustion vehicle.

“Securing zero-carbon, renewable power for QB2 is part of Teck’s commitment to environmental responsibility in every aspect of our business,” said Chris Dechert, Vice President, South America, Teck. “QB2 will be a major producer of copper, a critical material for building the low-carbon economy.”

Efforts at our existing Chilean operations have not gone unnoticed. In 2019, Teck’s Carmen de Andacollo (CdA) Operations was awarded with the Ministry of Energy’s Energy Efficiency Silver Seal. This award recognizing years of commitment from CdA staff to improve electricity and fuel efficiency at the operation, and to reduce emissions and costs without compromising production.

“By transitioning to renewable energy, Teck’s Chilean operations can realize opportunities to reduce emissions, save on energy costs, and support the broader shift to renewable energy sources in Chile, as the country works towards its own decarbonization goals”, said Chris Adachi, Manager, Sustainability and Climate Change.

Learn more about our approach to reducing emissions in the Energy and Climate Change section of our website.