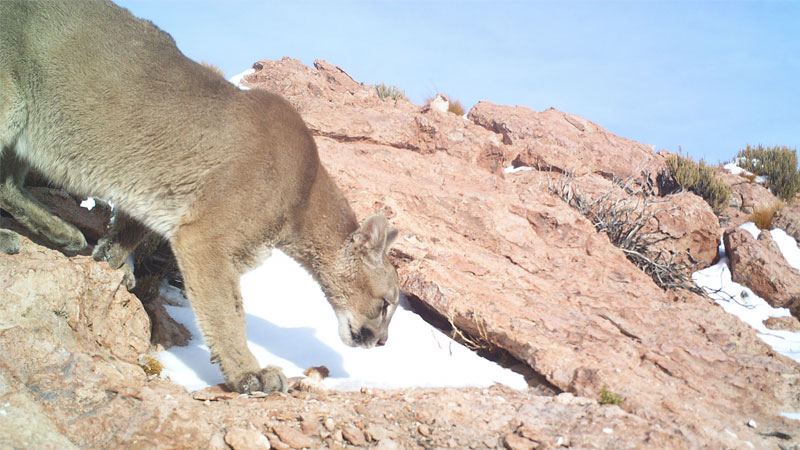 High in the Andes Mountains of South America lives the Andean Cat - a wild feline so mysterious that, until 1998, the only evidence that it existed was two photographs. This rare cat is also endangered, with less than 2,500 believed to exist. But high-tech research being led by Teck is helping to shed more light on these and other elusive mountain cats.

Teck’s Quebrada Blanca Operations is using high-resolution, weather-sealed cameras to monitor wild cats in the Andes Mountains. This footage will help develop a biodiversity plan that factors in the ecology of the cats to ensure they have sustainable, healthy habitats that co-exist near the operation. The study is one of the first of its kind in the Tarapaca region, as well as in Chile overall, where information on these species is limited.

“We have compiled a number of images that not only show where these cats go but also how they interact with the environment,” says Maria Elisa Gonzalez, Environmental Superintendent at Quebrada Blanca. “Once all of the footage is compiled, Teck will meet with the Chilean government and other community stakeholders to share the findings of the ecology of these cat species.”

There are three species of cats who live in the Andes being monitored and whose populations are declining - the Andean cat, Colocolo Pampas cat and Puma.

The Andean Cat, who is only slightly larger than a domestic cat, has a very long striped tail and smooth silky fur. This cat is known to roam throughout an area that stretches from southern Bolivia to southern Argentina, and is considered the most threatened among the three cats. It is ranked as endangered by the International Union for Conservation of Nature. Through this study, the Andean Cat was actually discovered in the Tarapaca region of Chile for the first time ever.

The Colocolo cat, who preys on small rodents, snakes and birds, is a relatively small cat that primarily roams in open habitats. Perhaps the most recognizable of the three species studied, the Puma is the largest feline in Chile. The Puma is a territorial and solitary creature whose habitat ranges all the way from the Yukon, Canada, to the Strait of Magellan in Chile.

The cameras, which operate 24/7, pinpoint the cat’s behaviour, helping to ensure that the mine does not interfere or disrupt their activity. Although the study will not be completed until 2022, Gonzalez, says it is already showing excellent data that the mine will advance its biodiversity plan. This research is just one example of Teck’s approach to wildlife management and biodiversity activities at our operations around the world.

Learn more about our approach to biodiversity.