Innovative new partnerships through Teck’s Copper and Health program are helping to increase the use of copper-infused surfaces in healthcare and public spaces to reduce the spread of infections like COVID-19.

Teck is committed to becoming a carbon-neutral operator by 2050, and two electric vehicle programs show how we’re working toward that goal and how we’re supporting our communities to take action on climate change.

Teck is a long-time supporter of the the Klinse-Za maternal penning program, which is a unique partnership between First Nations, government and industry helping to rebuild the threatened Klinse-Za caribou herd in northeast B.C.

Pictured here, a trail camera in the Elk Valley captures an image of a large grizzly bear. This was the fifth grizzly bear seen on this camera in a two-week span.

Teck’s Trail Operations has a long history of valued partnerships that have helped support local communities. Throughout their 125 years of continuous operations, leadership at Trail Operations prioritized fostering world-class athletes, most notably the 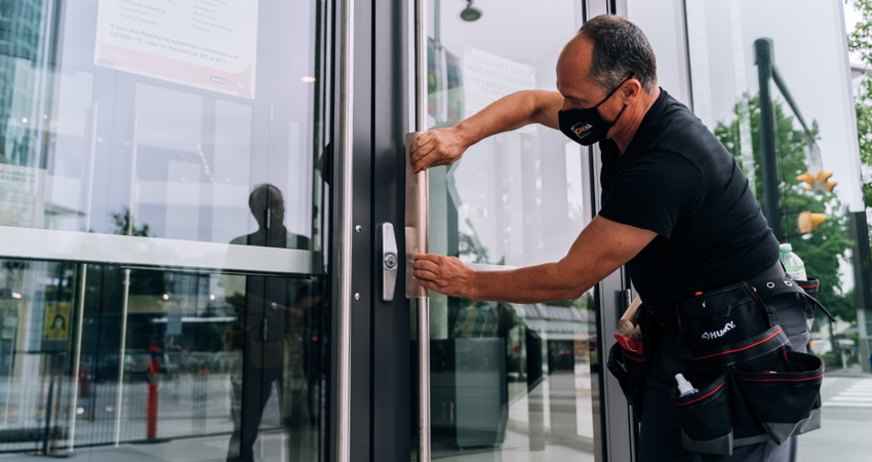 Innovative new partnerships through Teck’s Copper and Health program are helping to increase the use of copper-infused surfaces in healthcare and public spaces to reduce the spread of infections like COVID-19.

Following a successful pilot phase on Vancouver transit that supported copper's ability to kill up to 99.9% of bacteria on transit surfaces, copper surfaces were installed on high-touch surfaces on several Toronto Transit Commission TTC buses, subway cars, and streetcars, as well as additional TransLink buses and SkyTrain cars in Vancouver.

Teck is also partnering with universities in British Columbia to install over 2,000 antimicrobial copper patches on high-touch surfaces to protect the health of students, staff and visitors, and engage students in copper’s potential to create a safer school environment. 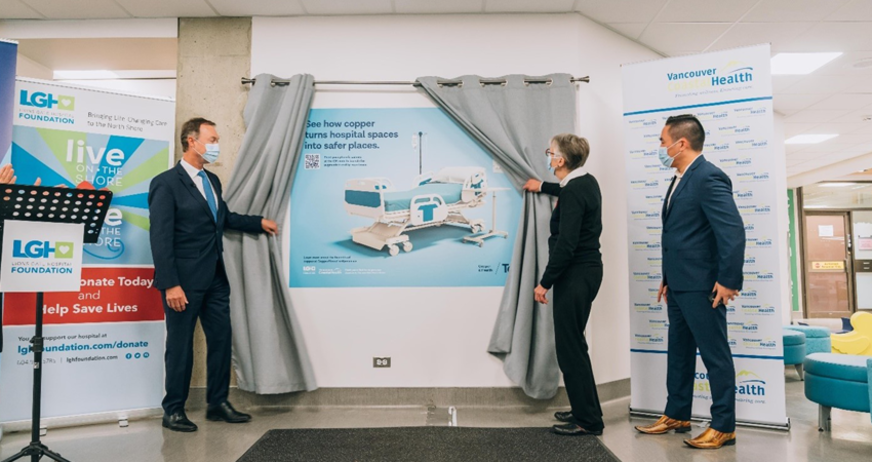 Lions Gate Hospital Foundation and Teck recently announced a $750,000 donation by Teck towards the redevelopment of the new Paul Myers Tower at Vancouver Coastal Health’s Lions Gate Hospital. The contribution will see the installation of antimicrobial copper surfaces and equipment throughout the new high-tech acute-care facility, including door handles, light switches, IV poles, bed rails, countertops and other high-touch surfaces.

To highlight the use of antimicrobial copper and to educate patients, healthcare workers and visitors, Teck and Lions Gate Hospital Foundation installed an augmented reality experience in the main atrium of the North Shore Hospital in Vancouver. The interactive installation showcases the innovative use of antimicrobial copper surfaces in a typical hospital room, along with key facts and benefits from the use of copper in healthcare settings.

You can also experience the augmented reality installation from home. Scan the QR code on the image below and see exactly how copper is making hospital environments safer for patients, healthcare workers, and visitors. 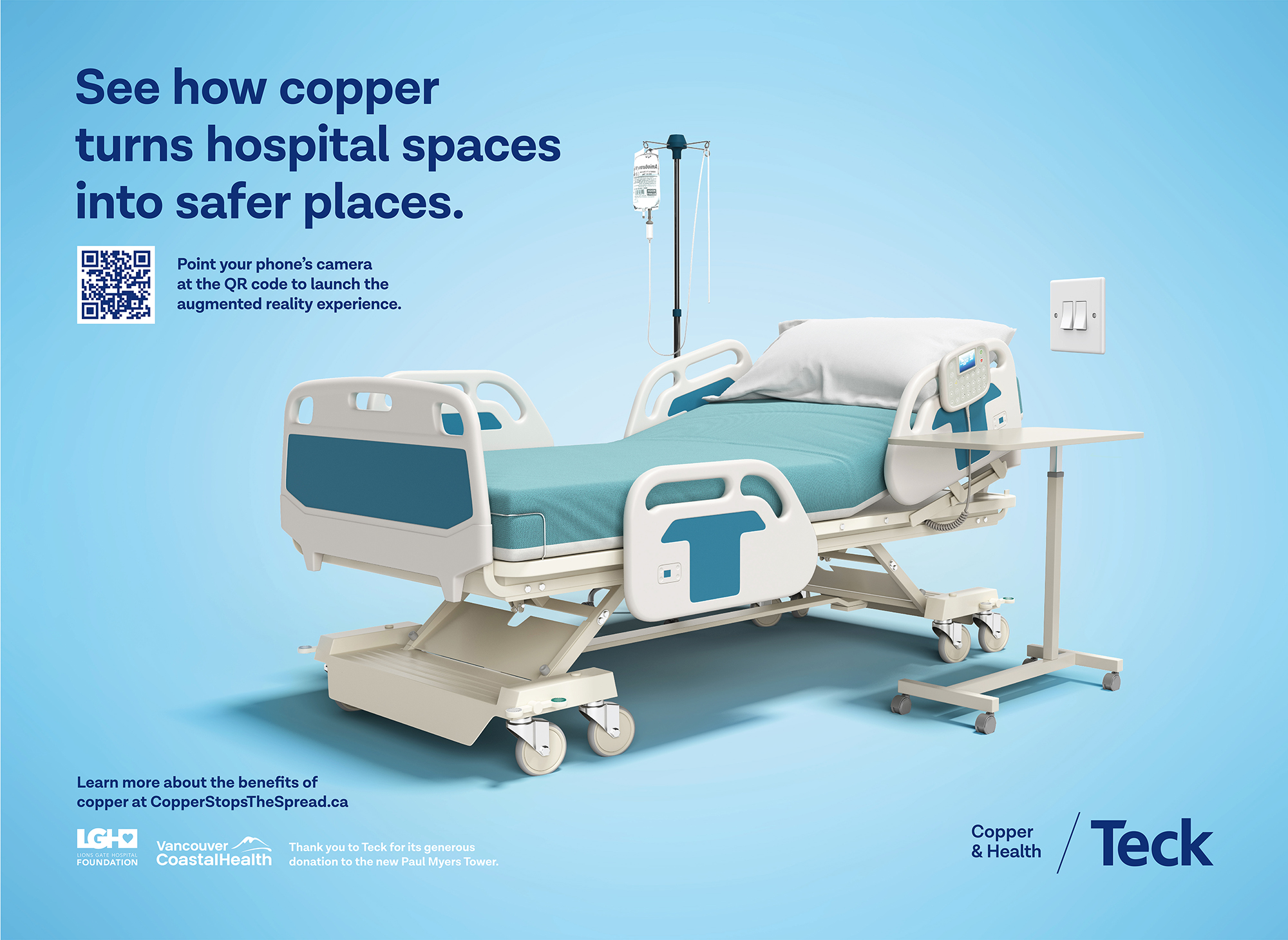 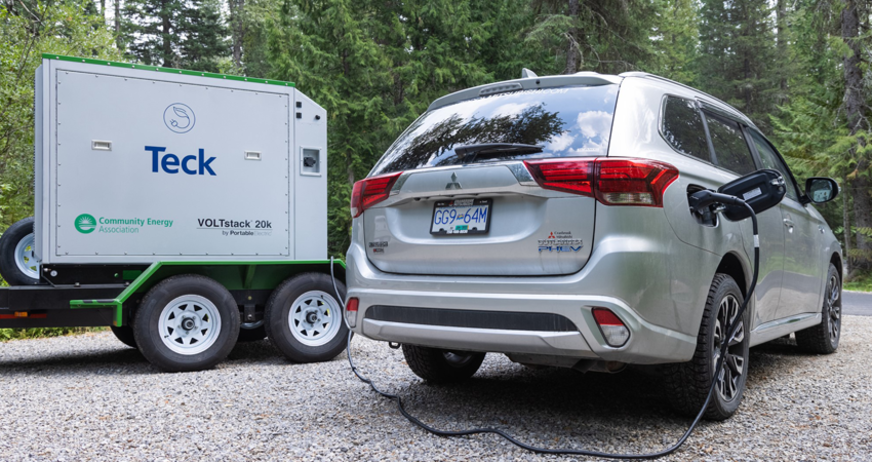 Teck is committed to becoming a carbon-neutral operator by 2050, and two electric vehicle programs show how we’re working toward that goal and how we’re supporting our communities to take action on climate change.

The first is the addition of four, brand-new, 100% electric taxi buses to Carmen de Andacollo’‘s vehicle fleet. Use of the taxi buses, which provide transport for personnel within the operation, will reduce fossil fuel consumption by about 1,000 litres per year. These are the first electric taxi buses for Teck Chile, representing a sustainability milestone.

The second initiative encourages carbon-neutrality in the communities in which we operate. In June, Teck announced the launch of Canada’s largest clean energy, mobile electric vehicle (EV) charger in the East Kootenay region of B.C., produced through a partnership between Teck, Portable Electric and the Community Energy Association.

Fully funded by Teck, the innovative mobile EV charger builds on previous, collaborative efforts to support EV adoption in the region, including Accelerate Kootenays, an award-winning initiative responsible for the installation of 40 Level 2 and 13 DC Fast Chargers across the region. The mobile charger provides an opportunity to engage with the public on the future of low-carbon transportation, including the use of battery and electric vehicle technology in cold weather and in rural communities. 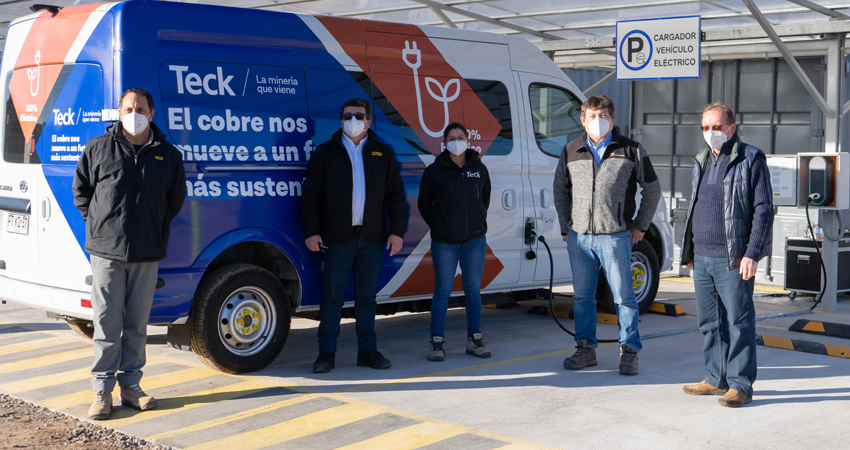 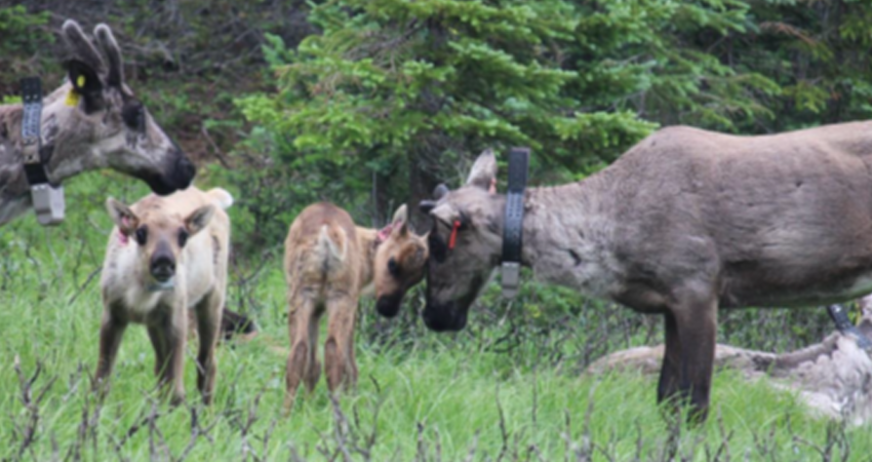 Teck is a long-time supporter of the the Klinse-Za maternal penning program, which is a unique partnership between First Nations, government and industry helping to rebuild the threatened Klinse-Za caribou herd in northeast B.C.

The program aims to protect pregnant caribou and their calves from predators during the critical birthing period, when they are most vulnerable to predation. Pregnant female caribou (cows) are identified and safely transported by helicopter to a remote and secure penning location. The cows are supported and cared for by a team of First Nations shepherds during pregnancy, through the delivery process, and during post-natal preparation for both the cow and calf to integrate back into their natural habitat.

This August yielded positive news for calves born at the Klinse-Za pen this spring. Even facing potential risk from wildfires, as well as difficult conditions during last summer’s heat wave, a majority (11 out of 12).  of the calves survived The calves were reported to be “happy, healthy, and growing quickly, eating their fair share of pellets and lichen,” according to an update from the penning team. 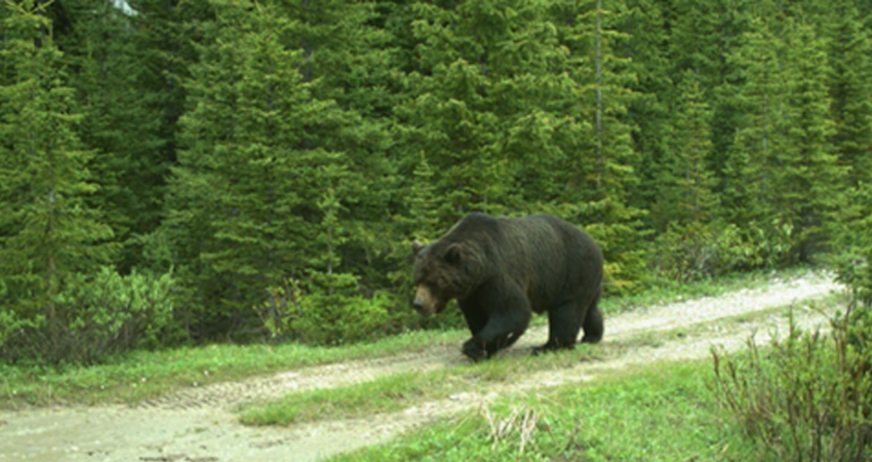 Pictured here, a trail camera in the Elk Valley captures an image of a large grizzly bear. This was the fifth grizzly bear seen on this camera in a two-week span.

The breathtaking landscapes of the Elk Valley in British Columbia are home and a playground for many Teck employees, who are fortunate to share this space with a variety of wild neighbors—including grizzly bears (Ursus arctos horribilis) one of the more iconic animals found in the region.

Grizzly bears are an important species for ecological and spiritual reasons, and it's important to understand and manage any impacts from our operations during their active denning period, when grizzly bears construct their dens for hibernation. The denning period in the Elk Valley runs from October 15 to May 15, a period that was determined based upon research reports that studied grizzly bears in mountain and foothill biomes in B.C., Alberta, and the USA. During the denning period, grizzly bears survive an extended period of low (or no) food availability by obtaining all their energy through metabolism of fat reserves. Expectedly, the denning period is variable due to differences between the sexes and cohorts of grizzly bears, as well as annual snow depth, as well as the reduction in easily available high-quality foods.

Any disturbance during the denning period has the potential to negatively affect grizzly bears through elevated energy use due to movement within the den, den abandonment, loss of cubs or displacement from denning areas. Understanding both the timing of denning and the location of dens is critical for the development and implementation of mitigation action plans for grizzly bears.

Teck uses the Habitat Suitability Index (HSI) modelling approach to assess areas based on their suitability for grizzly bear denning. The HSI evaluates elevation, slope angle, aspect, soil texture, soil drainage and vegetation cover to determine denning suitability. It was found that the greatest suitability for dens occurred on northeast-, north-, and east-facing slopes with soils deeper than 1 metre and from 1,700 to 2,300 metres in elevation. This approach enables Teck’s Biodiversity team to first evaluate the potential likelihood of denning habitats; these areas are then further investigated through annual surveys.

Between October 15 and December 20, surveys are conducted via helicopter or via ground-based visual surveys. The best time to conduct a survey is within two days of a new snow event, making it easier to see tracks, digs, and freshly excavated earth piles outside of den entrances. If an active grizzly bear den is found, a mitigation plan is created for each confirmed location, developed based on reliable sightings, consultation with a Qualified Professional, and the use of the biodiversity mitigation hierarchy. The biodiversity mitigation hierarchy describes the sequence in which different mitigation strategies should be deployed to develop a mitigation plan.

The grizzly bear mitigation action plan considers the following actions to avoid or minimize the threat of impacts to active dens:

Coal’s Biodiversity team is doing excellent work to ensure that this iconic species is as undisturbed as possible during their active denning period, and to help Teck be a good neighbour to our wild friends.

— The article was originally published in Coal’s monthly employee newsletter. 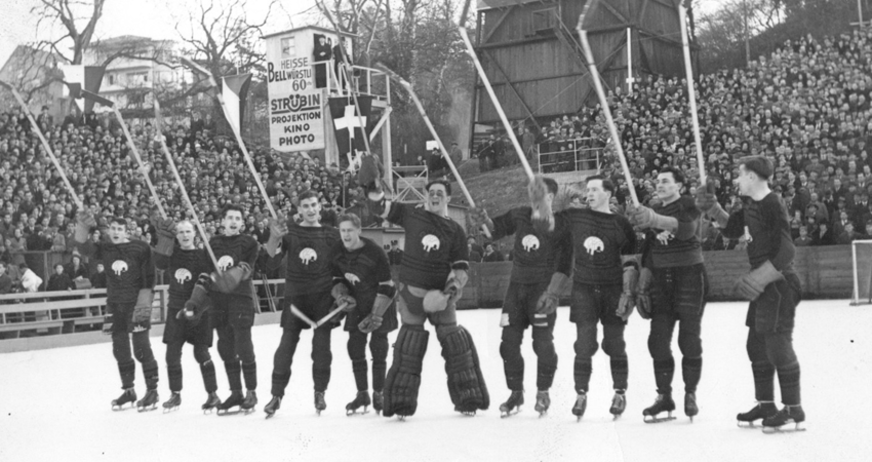 After winning the 1938 Allan Cup, the Trail Smoke Eaters earned the right to represent Canada at the 1939 World Hockey Championship Tournament in Europe in Basel, Switzerland, and went on to win the World Championship by defeating the United States 4-0. Their victory scene, pictured here, is also commemorated in a mural at the team’s venue, the Trail Memorial Centre, which Teck built and donated to the city on its opening night, November 29, 1949. Photo courtesy of the Trail Historical Society.

To celebrate this outstanding achievement, Teck was honoured to host a special virtual celebration with our employees and three of Team Canada’s Tokyo 2020 medalists:

Employees in Canada joined the virtual event with President and CEO Don Lindsay and heard personal Olympic and Paralympic experiences from Evan, Allysha and Greg about what it means to pursue excellence in their fields and represent Canada at the world’s most prestigious international sporting competition.

Employees who were unable to attend the live event may watch the recording on connect.teck.