Caring for the People, Communities and Land that We Love

Caring for the People, Communities and Land that We Love

Our Purpose statement captures the sense of personal responsibility and genuine care we have for the people, communities and lands that we’re entrusted with.

That sense of personal responsibility and genuine care can be found in the work underway across Teck to achieve the goals we’ve set out for ourselves under eight strategic themes within our comprehensive Sustainability Strategy.

Examples of work underway, including initiatives that demonstrate how we’re caring for the people and lands we’re entrusted with, can be found in the Stories section of teck.com.

When it comes to caring for communities, we focus on collaboration with communities and Indigenous Peoples to generate economic benefits, advance reconciliation efforts and improve community well-being, and the achievement of our sustainability goals.

The stories that follow are just a few ways we’re working to deliver on that priority.

Spotlight on Partnerships: Supporting Communities in the Elk Valley

Ensuring the well-being of our communities is fundamental to who we are, and to the long-term success of the company. These new videos highlight a few of the recent partnerships with local businesses and organizations in the communities in which we operate in the Elk Valley of British Columbia.

September 30, 2021 marked Canada’s first National Day for Truth and Reconciliation, which recognizes the tragic history of residential schools and honours the survivors and affected families and communities.

Teck is committed to playing a role in the ongoing process of reconciliation with Indigenous Peoples in Canada. We recognized the National Day for Truth and Reconciliation as an opportunity to engage in meaningful discussions about the effects of residential schools and their legacy, and we will continue to advance initiatives that support the self-defined goals of Indigenous communities, as well as work with various local, national and international organizations and programs to support Indigenous Peoples.

In 2021, a number of contributions were made to organizations to help advance reconciliation, including $50,000 to the Indian Residential Schools Survivor Society in support of advanced service provision to survivors and others impacted by residential schools.

Teck Employee Indigenous Library Program by Raven Reads
In support of National Day for Truth and Reconciliation, Teck launched a new Employee Indigenous Library Program by Raven Reads—an Indigenous-owned reading subscription service focused on Indigenous authors and literature. The program provided every employee in Canada with the opportunity to learn more about Indigenous history, traditions and culture. Through the partnership with Raven Reads, Teck covered the cost of a book by an Indigenous author for all interested employees in Canada. For more information on this program, please reach out to Heather Lawrence, Manager, Indigenous Affairs.

How a collaborative effort between Teck and the Indigenous Association Nascent Aymara of Collahuasi helped establish a new roadway through the Tarapacá Region to Quebrada Blanca Operations (QB) in Chile.

The geographic location of QB presents several challenges, including transportation routes to and from the operation. Previously, the main access to the site required travelling over 137 kilometres of unpaved mountain road, with more than 250 curves and steep slopes.

As part of the construction for Quebrada Blanca Phase 2 (QB2), a new road was built that connects the A-65 public highway to the site, creating a safer, more efficient route and making the project more accessible as it moves towards operations.

The development of the alternative route, A-97B, involved significant engagement and dialogue with the local community. The Indigenous Association Nascent Aymara of Collahuasi played an active role to ensure that plans for the new road respected the heritage and environment of the region, including leading cultural education sessions for employees and contractors on the traditional cultural activities of the Aymara and the ancestral value of the land, as well as implementing protective measures for areas with vulnerable domestic fauna. As part of QB2 project impact mitigation measures, plans were also established to reduce disruption to animal activity, including designating protected areas for animal grazing throughout the work.

The opening of the roadway was celebrated by representatives from Teck, Bechtel and the Indigenous Association Nascent Aymara of Collahuasi, who also organized and hosted a ceremony with a blessing of the new passage.

For Amparo Cornejo, Vice President of Sustainability and Corporate Affairs, Teck Chile, the meaningful relationship developed with the Indigenous Association Nascent Aymara of Collahuasi is a reflection of the way that mining operations can coexist with communities, noting that “the success of this project is an example of how we can contribute to community development while respecting each other and participating in local traditions.”

"The relationship with Teck has been positive,” said Efraín Choque, President of the Indigenous Association Nascent Aymara of Collahuasi. “We’ve worked through any challenges by coming together for discussions in good faith, and we hope to be able to continue on this path forward.”

The above is an adaptation of a story originally published in Somos, Teck Chile’s employee magazine. 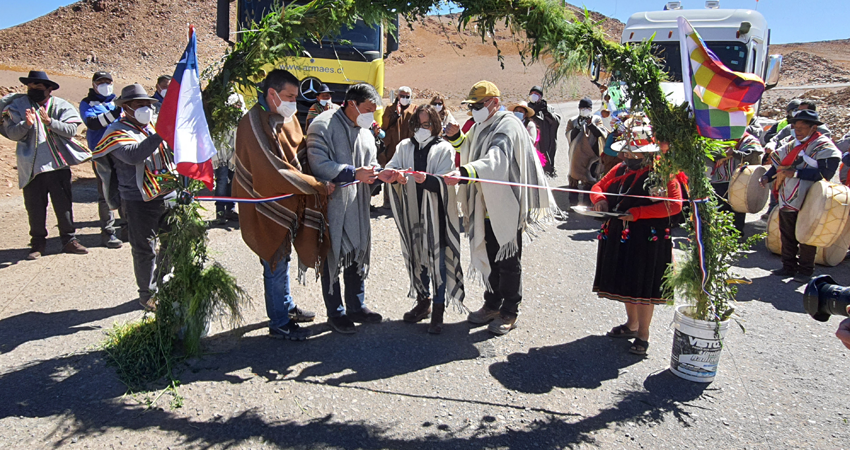 Our Economic Contributions: By the Numbers

Teck’s operations and activities generate significant economic value and help to support opportunity, jobs and growth in communities around the world.

In August 2021, Teck released our fourth annual Economic Contribution Report, which provides information about the economic benefits created in the communities and jurisdictions where we operate, including payments to suppliers, employee wages and benefits, and payments to governments.

Some of the highlights are below or click here to learn more and download Teck’s 2020 Economic Contribution Report here.