Operators in the High-Tech Driver's Seat

Operators in the High-Tech Driver's Seat

Corey Fowler was never a gamer, but when the Coal Mountain shovel operator had the opportunity to operate Teck’s first-ever remote controlled dozer, it was an opportunity he was not going to pass up.

“When we started talking about the possibility of using a remote dozer, I’d never heard of anything like that before,” said Corey. “I said, ‘I’m not a gamer, but I’ll try anything once.’ ’’

The idea for a remote controlled dozer at Coal Mountain first came up as a potential solution to a geotechnical hazard in one of the pits.

A buttress had been constructed to prevent further collapse at a wedge failure on one of the high-walls, but the problem was that crews could no longer safely access coal underneath.

“We put in a buttress at the toe of the wedge failure, but that eliminated any way we could get the coal out,” explains Ben David, Senior Engineer, Mining, Coal Mountain. “And removing the buttress to access that coal would create a situation we weren’t going to put an operator in.”

So, Coal Mountain’s engineering team went to work investigating ways they could send a dozer into the pit without putting anyone in harm’s way. Working closely with teams from Finning and Caterpillar, by February 2017 they had received all the parts to make the remote dozer a reality. By working collaboratively with the Ministry of Energy and Mines, Coal Mountain was then able to get the necessary permits and approvals, and within a few weeks were ready to test the technology.

Crews opted to use an older shovel cab to set up the operator’s station because it was large enough to house the required monitors, high enough to get a clear view of the dozer, and safe and comfortable for the operator.

The dozer itself has four cameras attached to it. In the shovel cab, the operator has a 42-inch screen with quadrants displaying all four camera views – both front corners, over blade and a reverse view. A second 42-inch screen has access to two overhead pit cameras, installed at the top of pit high-walls. A smaller laptop screen shows the remote dozer’s Carlson Grade software, which displays cut/fill and position information and gives the operator real-time feedback to help achieve the proper grade.

Finally, there’s the remote control itself, which sits on the operator’s lap and has smaller joysticks to move the dozer. Built-in sensors shut the dozer down if it gets onto too steep a grade, allowing the operator to back out and prevent the equipment from getting into a precarious position.

“The first time I used it, I was a little nervous,” admits Corey. “When you run a dozer, everything is by feel and this is not by feel. It’s all with your eyes, and you only have little joysticks now, compared to a dozer where the joysticks are much bigger.”

By summer, crews had trained two operators and put the remote dozer into action.

“This is the first time in B.C. that the remote dozer has been used in a production setting and we are doing something that a year ago we didn’t think was possible,” says Ben. “We can now get coal from areas we never would have been able to access before and have safe production.”

Ben says that the success of the remote dozer has the potential to revolutionize the way the industry looks at mining from the pit bottom. As for operator Corey, he’s excited to work for a company that embraces technology and challenges his skills as an operator.

“Teck is looking to the future and the technology that is out there. In my mind, if we can make this work, we can make anything work,” he says, admitting that he never thought he’d be using such innovative technology. “And I guess you can call me a gamer now.” 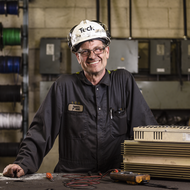