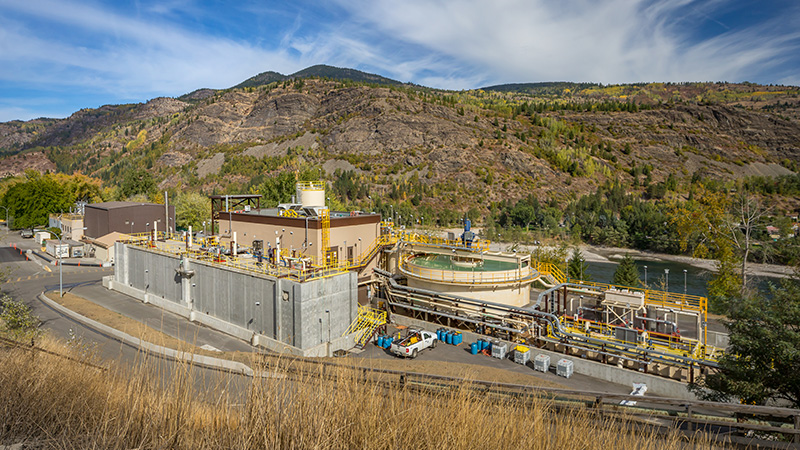 People often have a negative association with bacteria, but the millions of bacteria now living and thriving in our Groundwater Treatment Plant at Trail Operations are actually helping us to clean the water.

Clare North, Superintendent of Environmental Remediation at Teck’s Trail Operations, is focused on creating the perfect living conditions for growing this bacteria. She, and more specifically Trail’s new Groundwater Treatment Plant, is helping to clean up historical impacts underneath the operation.

“We rely on bacteria to do very important work for us,” says Clare, explaining how bacteria is used to remove ammonia from groundwater beneath the operation. “We have nutrients and supporting structure placed in the tanks that look like little cartwheels that are essentially houses for the bugs. The bacteria cling to them so they can do their work.”

A hydrogeologist by training, Clare was a consultant with Teck studying Trail Operation’s impact on groundwater quality, a result of historical operations and materials storage prior to the 1980s. In 2011, she came to Teck full-time, joining a dedicated team of scientists, engineers and other professionals to create a plan to remediate impacted groundwater and meet regulatory requirements.

Clare and the team undertook a series of drilling campaigns that identified where the groundwater had higher concentrations of ammonia and several metals. After analyzing the extent of the issue, they determined that hydraulic interception was the best method to treat the water, using underground pumps to direct water through a treatment plant before it is sent to the Columbia River.

“Studies conducted to date have found that the fish populations in the river are not affected by the groundwater, and the water quality of the river meets drinking water standards,” explains Clare. “That being said, we are committed to remediating the groundwater impacted by our historical activities.”

Putting the Plan into Action

Construction of the $46 million groundwater treatment facility began in 2015 and was completed in the spring of 2017. Testing began with small volumes of water, and by the fall, they were up to full treatment rates. The treatment process works in two stages. The first stage extracts the metals, which are then added into our current metallurgical processes. The second phase addresses the ammonia, which is where the bacteria come in. These bugs use the ammonia as food, removing it from the water.