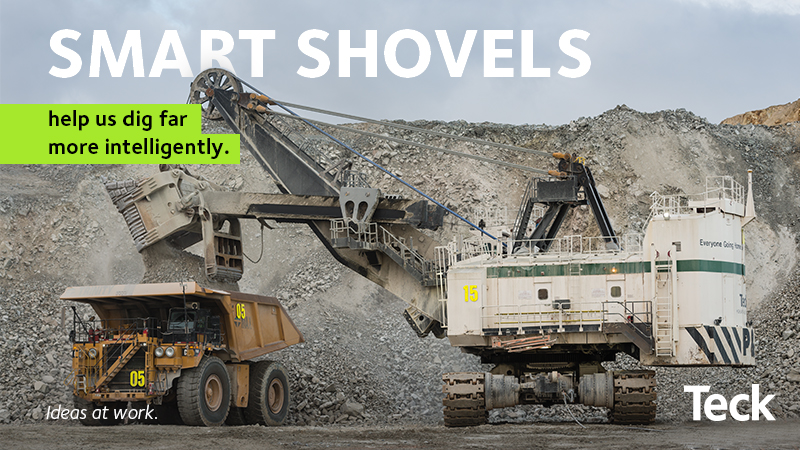 Most people think of a shovel as a pretty basic tool - you use it to move stuff from one place to another. But what if the shovel was smart? What if it could analyze and know exactly what it was carrying? That’s the idea behind a new mining technology Teck is pioneering to improve productivity and sustainability at our operations.

To make a shovel smart, sensors are mounted on the shovel bucket and use x-rays to tell the difference between waste rock and valuable ore, one shovel load at a time. The sensors, combined with analytics, provide real time information to determine whether the load is worth sending to the mill for processing, or for handling as waste rock. Decisions that were once a matter of informed estimates can instead be based on real-time data, leading to improved mill productivity, reduced energy use, and less water consumption.

“We’re sorting the wheat from the chaff with more precision than ever before with these smarter shovels,” said Bryan Rairdan, Technical Services Manager at Highland Valley Copper Operations.  “This technology helps us to use less energy, create fewer emissions and improve productivity. In fact, smart shovels have the potential to create hundreds of millions of dollars in value.”

Teck partnered with MineSense for the first full scale trial of the bucket-mounted ShovelSenseTM technology in 2017 at our Highland Valley Copper Operations in British Columbia. The sensors are now in use on one shovel, and additional shovels could be considered for later in 2018.

We’re putting ideas like smart shovels to work across our operations. Learn more about our approach to innovation and technology.