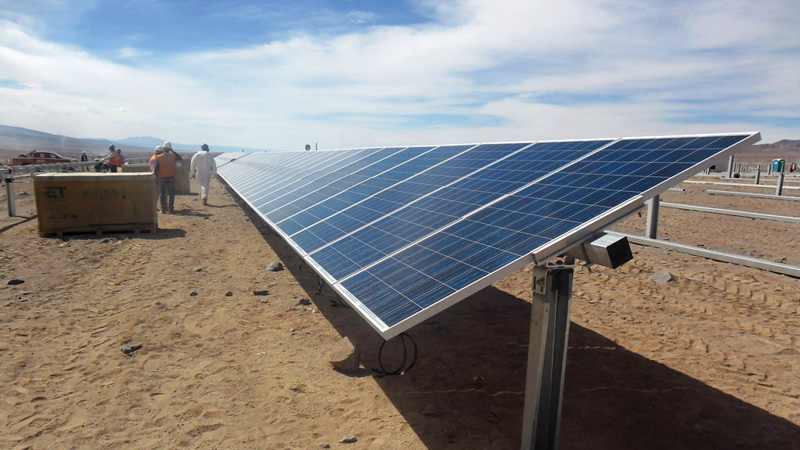 As a company with more than 100 years of experience, we at Teck recognize the need to adapt to the limits of our environment and to implement activities that reduce our energy consumption, reduce greenhouse gas emissions and promote alternative energy generation. For years, Teck has worked to improve our energy efficiency, and since 2011, we have implemented projects that have reduced energy consumption by a total of 1,550 terajoules (TJ).

In addition to our long-term goals to reduce energy consumption and greenhouse gas emissions, it is our goal is to commit to 100 megawatts (MW) of alternative energy generation by 2030 and as part of that goal, we have evaluated and used alternative energy sources at our operations. For example, at our Quebrada Blanca Operations (QB) in northern Chile, solar power is one of our primary energy sources.

In 2013, QB partnered with AES Gener, a producer and distributor of electricity in Chile, to guarantee a supply of solar power for the next 20 years. This partnership is part of the strategic development of renewable energy sources for current activities at the operation as well as future activities at Quebrada Blanca Phase 2 (QB2), a project that will develop the hypogene resource at QB.

The solar power is delivered to QB through an on-site electric system that receives energy from Andes Solar, a solar power plant that uses energy sourced from solar, wind, hydro and biomass. The system has a capacity of 21 MW and delivers hourly energy without backup for a total of 55 gigawatt hours (GWh) per year. This amount of solar energy is equivalent to 30% of the total energy consumed by Quebrada Blanca. The remaining energy requirement, which is supplied though the same interconnected grid, is generated from traditional fuel sources, coal and gas. To generate this quantity of energy, Andes Solar uses approximately 50,000 solar panels covering an area of 800,000 square metres, which is equivalent to the size of over 100 football fields.

“Sourcing Quebrada Blanca’s power through solar electricity from AES Gener has positioned the operation to be a leader in Chile for the production of clean and renewable energy”, said Marcos Cid, Senior Electrical Engineer, Teck. “Through this project, our goal is to contribute to global climate action, become more energy efficient and continue to responsibly produce the materials essential for society.”

View the work Teck is doing to address each Sustainable Development Goal.