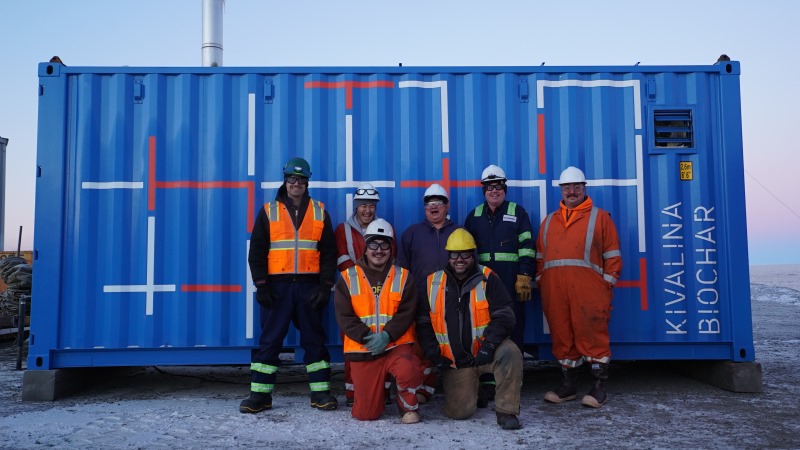 A different kind of shipping container arrived at the port near Teck’s Red Dog Operations in Northwest Alaska in December 2016. Instead of carrying supplies or fuel like most that arrive here, this container brought the world’s first winterized human waste bioreactor, destined for the remote village of Kivalina.

With an average annual precipitation of only 8.6 inches per year, Kivalina is not able to a maintain water repository and sanitation system to sustain the entire community. Without a central sewage system, flushing household toilets are not supported and so community members currently resort to using honey-buckets (bucket latrines), which poses a health risk to the village of nearly 500.

Adopting Innovation for the Arctic

The new Biochar Reactor is a key tool for addressing this challenge. The bioreactor, an arctic adaption of technology prototyped by the Climate Foundation with support from the Gates Foundation as part of its Reinvent the Toilet Challenge, is a pipe-less, relocatable sanitation system.  It processes solid human waste using a process called pyrolysis and transforms the waste into biochar—a carbon-rich, pathogen-free, value-added byproduct. Biochar can be used to ¬filter odor, boost plant growth as a soil amendment, and remediate pollution at contaminated sites.

“The Kivalina Biochar Reactor is a safe way for the community to dispose of their sewage as well as an effective solution to an overflowing landfill and declining public infrastructure budgets,” said Jennifer Marlow of the community group Re-Locate. “It can reduce the volume of solid human waste disposed at land¬fills, offer an alternative to piped infrastructure, lower monthly homeowner costs and transform waste from health hazard into a resource.”

Funded by Teck and the NANA Economic Development Program, the bioreactor was identified as a priority by Kivalina City Council and the Native Village Council in 2015. Community group Re-Locate and bioreactor developer Biomass Controls, supported the project and provided operator training.

The Biochar Reactor was delivered to Kivalina in July, 2017, and a second operator training session will be held in 2018.