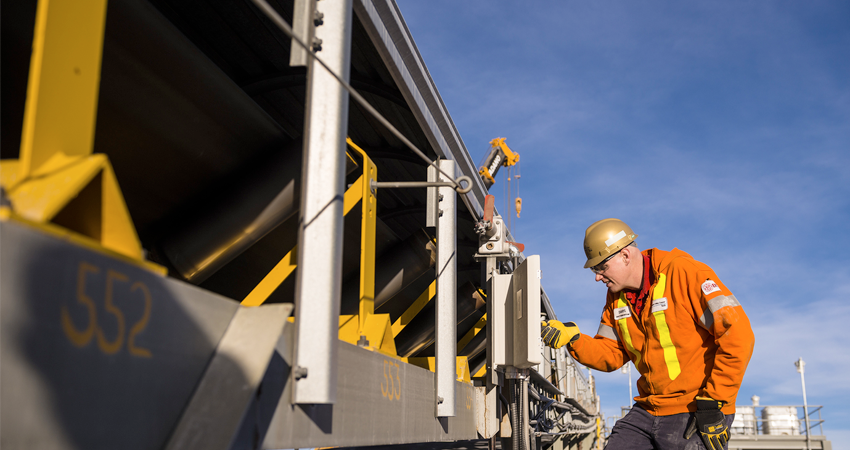 Highland Valley Copper has already received ideas on heating/cooling, lighting and pumps that it is estimated will save more than 6.5 terajoules (TJ) in energy and $150,000 in energy costs when implemented.

Bob Cave, a Cyclone House Operator with 15 years of experience at Highland Valley Copper (HVC), noticed a minor difference between two pumps that was having a major impact on energy consumption and saw an opportunity for improvement.

HVC’s reclaim water pumps use a significant amount of energy. So when Bob saw that one of the two pumps, which had recently been upgraded, was using less energy for the same amount of water, he decided to make it the primary pump. While that quick thinking helped reduce the amount of energy used, the second pump was still a problem.

So when site-wide Energy Coordinator Craig Haight came by to discuss a new energy reduction campaign, Bob made a suggestion to refurbish the second pump as well. It was a suggestion that would significantly reduce energy use and save thousands of dollars.

Energy is one of Teck’s most significant operational expenditures and sources of GHG emissions. To help tackle this challenge, HVC piloted an anti-idling program in 2011 to improve energy efficiency and reduce emissions. What made the anti-idling pilot a success was that everyone at HVC supported the program, showing how a small change in the way we operate can make a huge difference.

Building on the success of that initiative, HVC recently launched a new campaign called Bright Ideas to seek input and suggestions from employees on how to reduce energy consumption and improve energy efficiency. From changing fan motors to optimizing the design of haul truck boxes to turning off the lights in areas that aren’t being used, Bright Ideas can be about anything that saves energy.

“When I saw the e-mail from our CEO in September about needing to cut back, I knew we all had to do our part,” said Bob. “That’s why I shared my ideas on energy reductions, and I’ll keep sharing. Over a thousand people work at HVC— if we all shared our ideas, imagine how much energy and money we could save.
It doesn’t matter where you are or who you are, we’re all in this together.”

While the campaign officially launched in November 2015, the Bright Ideas message has been spreading across site since the summer. The team led by Craig has already received ideas on heating/cooling, lighting and pumps that it is estimated will save more than 6.5 terajoules (TJ) in energy and $150,000 in energy costs when implemented.

To keep the ideas coming, the energy team will start visiting crews to hand out Bright Ideas cards. Employees are encouraged to look for ideas, big and small, on how to reduce energy, then fill out the cards and hand them in to their supervisors.

Commenting on the overall benefit, Craig said: “Bright Ideas is identifying and acting on ideas that will make a big impact on our energy consumption, our sustainability performance and ultimately, our bottom line.”