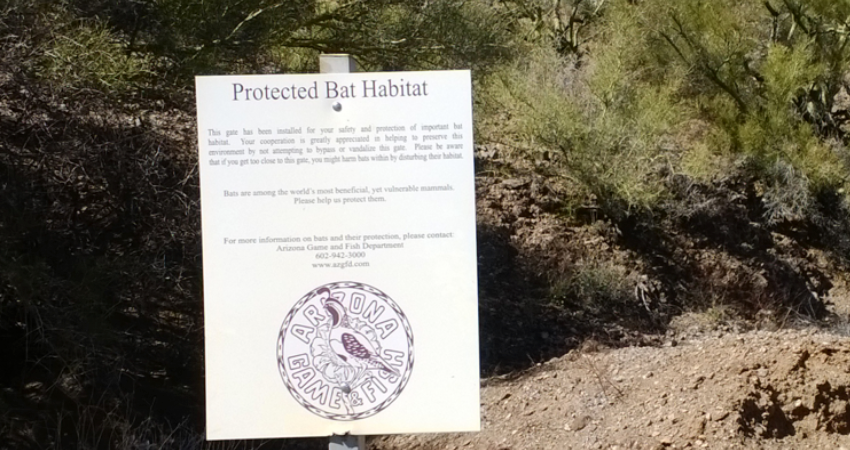 Teck American implemented the closure plan with an unwavering commitment to health and public safety, as well as the preservation of significant wildlife habitat. - U.S. Department of the Interior, Bureau of Land Management

In some cases, Teck’s commitment to responsible closure and reclamation can mean rehabilitating sites that we never actually mined. An example of this is the former McCracken Mine in Arizona. An historically significant silver mine in Arizona, the McCracken Mine was mined episodically between the 1870s and 1985. Though Teck acquired the title to the patented claims for McCracken, we never operated the mine.

Surveys of the site determined that safety risks posed by old openings to underground workings required extensive closure work. Teck undertook that work in 2008, securing nearly 50 mine openings to ensure safety. That closure included collaborating with wildlife experts to install specially-designed gates and other barriers that protected underground habitat for four different species of bats, while closing human access to the mine.

In 2015 and 2016, Teck undertook additional voluntary reclamation work in partnership with the U.S. Bureau of Land Management, removing approximately 20,000 cubic yards of historic tailings from adjacent public lands and placing them into an engineered repository on Teck property, further enhancing safety and environmental protection at the former mine. During the reclamation work, special care was taken to prevent harm to protected species including Sonoran Desert Tortoise and migratory birds.

Teck’s efforts to responsibly close and reclaim this historic site were recognized with the Bureau of Land Management’s “Fix a Shaft Today’ award and the Arizona State Mine Inspector’s Abandoned Mines Program Voluntary Action Award.