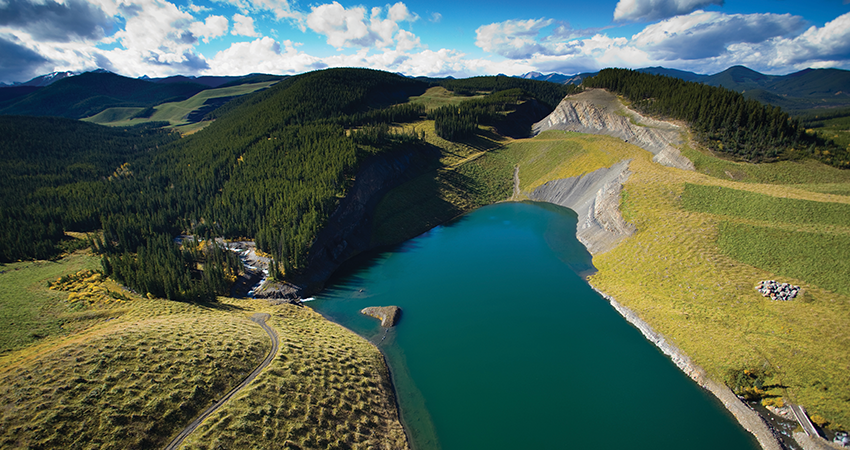 Reclamation Example: Making a Mine Pit into an Aquatic Habitat

Comprehensive early reclamation planning has helped create a habitat for rainbow trout and bull trout to thrive out of a former mining pit at our Cardinal River steelmaking coal operations near Hinton, Alberta.

Cardinal River Operations is one of Teck’s six steelmaking coal operations in western Canada. Located within the Luscar mine, this pit was actively mined from 1992 to 1999. As it was located in the drainage of Sphinx Creek, prior to mining a channel was made for Sphinx Creek to go around the active site. Once mining was complete, our goal for reclamation was to restore the flow of the creek and establish a fish habitat as good, or better, than before the mine.

First, the Sphinx Lake pit lake system was constructed by replacing and reshaping the material removed during mining to backfill some of the pit, and then filling it with water. The next step was constructing an inlet and outlet channel for the lake, as well as habitat suitable for aquatic plants and other life.

Next, Sphinx Creek was redirected into the newly constructed channel into the lake, serving as a spawning and rearing stream.

We’ve watched over the years as Sphinx Lake has flourished, and today it meets all of the criteria for an ecologically healthy lake. The Sphinx Creek watershed now provides healthy habitat for a substantial population of both resident and migratory native rainbow trout, as well as bull trout—both of which are listed as Species of Special Concern by Alberta’s Endangered Species Conservation Committee.

In 2007, our work to create Sphinx Lake was awarded the Major Reclamation Award by the Alberta Chamber of Resources.