Population of Threatened Caribou Herd Triples Thanks to Penning Program 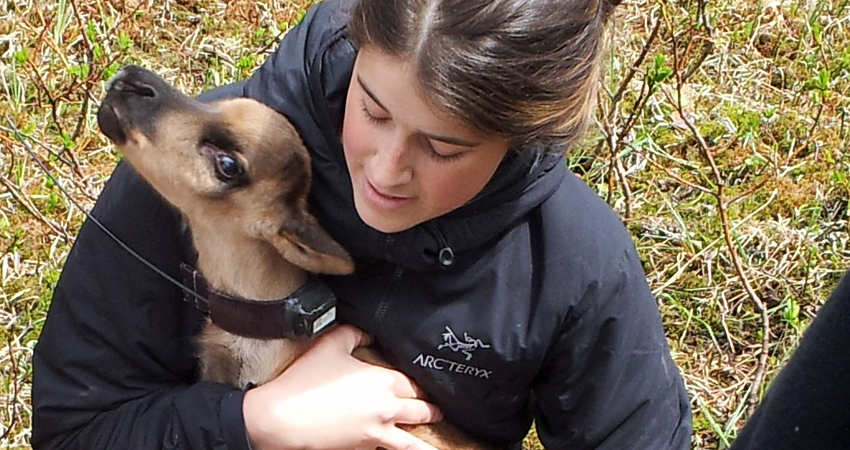 Nearly a dozen caribou calves got a stronger start on life this year, thanks to the special care they received from First Nations shepherds and local biologists through a program aimed at keeping the young caribou safe. These 11 calves and their mothers are part of the threatened Klinze-Za herd in northeastern B.C. near Teck’s Quintette project. To encourage the recovery of this culturally significant herd, they were raised as part of an innovative caribou penning program, operated with support from Teck.

About the Caribou Penning Program
After decades of excessive predation, the Klinse-Za herd had only 23 individuals left. In 2014, Teck partnered with West Moberly First Nations, Saulteau First Nations, Wildlife Infometrics, West Fraser Integrated Forestry and others industry peers to implement the Klinse-Za maternal penning program. As of June 2016, the herd had more than tripled in size to 60 caribou thanks to the program, which protects caribou during a critical period – before and after the birth of calves.

How it works
A group of caribou females in their third trimester of pregnancy are safely collected and transported to a remote, secure penning site. Once at the site, a team of First Nations shepherds protects the cows from predators, and cares for them during the term of their pregnancy and for four to six weeks after giving birth.

The mothers and calves are fed lichen collected from the surrounding region and veterinary-approved pellets, collared for research and tracking purposes, and released back into their habitat once the calves are weaned.

“With the support of predator control, maternal penning is proving to be an effective way to stop the decline and actually increase the overall caribou population in this herd,” said Brian Pate, Wildlife Infometrics. “We also learned that a collaborative project lead by First Nations and supported by government and industry is a good model to carry out a cost-effective, efficient and time-constrained project.”

Why Teck is involved
Teck is committed to supporting biodiversity in the areas where we operate, as part of our commitment to responsible, sustainable mining. Our involvement in the maternal penning program started in 2011 when we met with the Saulteau First Nations to discuss a regional multi-stakeholder initiative to address the issue of declining caribou populations. During a series of workshops in 2012, the Peace Northern Caribou Committee was formed and its members identified maternal penning as a priority action.

What else is Teck doing to support the caribou?
Securing habitat for the caribou is an essential part of the Province of BC’s plan for recovery of caribou populations in the South Peace area. As part of our application to resume mining at our idled Quintette operation, we calculated the amount of high elevation winter habitat that our activities would affect, and used that as a baseline for determining how much additional land to secure and conserve for caribou habitat. In accordance with the Province’s plan, our requirement was to secure four times the amount of land potentially affected by mining. In fact, we have taken the necessary steps to secure seven times the amount of land expected to be affected.

Learn more
Further detail about the penning program is available in this case study from our 2014 Sustainability Report.