Mapping the Migration of Harlequin Ducks 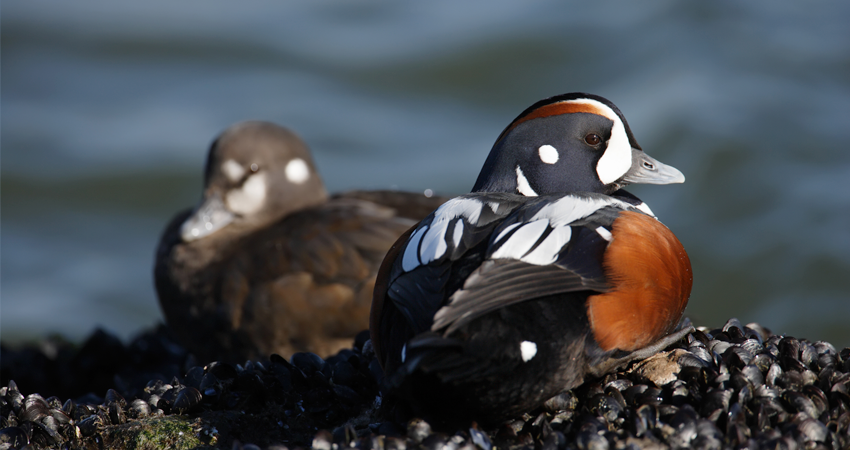 Named for the masks worn in classic Italian comedies, the colourful Harlequin Duck is found near our Cardinal River Operations in Hinton, Alberta. Teck has implemented a monitoring and management program for the ducks for the last 20 years, but little is known about the potential risks they face during their annual migration.

The Challenge Facing Harlequin Ducks
Harlequin Ducks, which are a species of special concern in Alberta, breed each year in McLeod River near the mine. Since the ducks tend to breed in the same spot year after year – a phenomenon called site fidelity – protecting their habitat is important. Over the past two decades, we have taken steps to protect Harlequin habitat, including protecting habitat and constructing duck crossings on Prospect Creek, Whitehorse Creek and McLeod River to provide good access for the Harlequins along the stream channel.

After breeding, the ducks leave McLeod River in the summer and travel west across British Columbia as far as Haida Gwaii and Vancouver Island where they spend the winter. Scientists think that given the ducks’ site fidelity to breeding zones, they are likely to return to the same regions on the coast and congregate in large groups. Unfortunately, Harlequin Duck migration patterns and wintering locations are relatively unknown, which makes it difficult to create a comprehensive conservation plan for the species.

Learning More About Migration
In 2016, biologist Beth MacCallum, who has worked with the Harlequin Ducks near Cardinal River since the mid-1990s, partnered with Teck, Hinton Wood Products and Environment Canada to launch the Harlequin Duck Migration and Connectivity Project. The objective of the project, which tracks 10 pairs of ducks from the McLeod River population, is to inform future conservation and management activities. 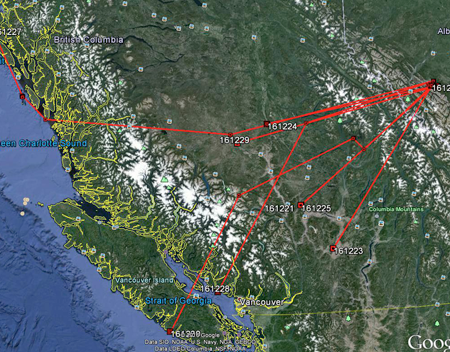 Thanks to the transmitters and associated satellite imagery, researchers have been able to track the male ducks this summer as they travelled to the coast. The female ducks will follow in late summer once their young are fledged and able to fly. The project will conclude when the ducks return to McLeod River to breed in May 2017.

“We’re learning so much about their inland and coastal movements. All the male ducks left the McLeod for the coast between June 4 and June 21; all are moulting in different locations on the coast; it will be fascinating to see where they gather in the winter when the females arrive,” said Beth MacCallum, author of Status of Harlequin Duck in Alberta and biologist with Bighorn Wildlife Technologies. “As nearshore activities increase and predation rates change, the ducks are exposed to more potential risks. Knowing where they winter will help us to protect them.”

“This important research embodies Teck’s commitment to contribute to biodiversity conservation knowledge through collaboration in research, education and conservation,” said Steve Hilts, Director, Environmental Legacies. “Overall, our goal to achieve a net positive impact on biodiversity in regions where we operate, which includes progressive species monitoring and management.”