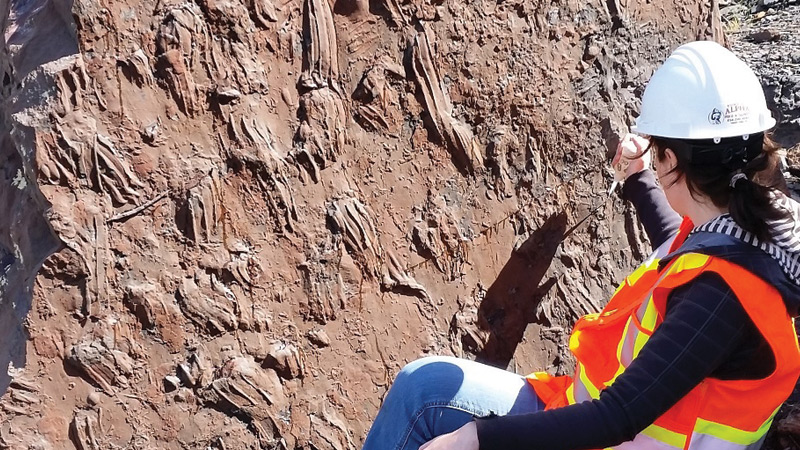 “The wonderful discovery by Kevin Sharman and the Tumbler Ridge Museum Foundation exemplifies the cooperation that Tumbler Ridge continues to enjoy with the industry that operates within our borders.” - Don McPherson, Mayor of Tumbler Ridge

A discovery by an employee at Teck’s Quintette Project, south of Tumbler Ridge, has turned out to be one of the finest examples of fossilized crocodilian tracks in the world. Teck Geologist Kevin Sharman already had a string of important fossil discoveries to his credit in the area; however, when he encountered an intriguing series of large rock slabs in April, he knew that what he was looking at was different and special. The discovery was immediately reported to the scientists at the Peace Region Palaeontology Research Centre in Tumbler Ridge.

“There are well over 100 tracks, almost all of which are crocodilian. Most of the tracks are associated with claw impressions, which are very long and represent the activities of bottomwalking and -swimming crocodiles,” said Richard McCrea, Curator of Palaeontology at the Tumbler Ridge Museum Foundation. “The traces are striking in appearance and are among the best-preserved crocodilian tracks ever found.”

Museum staff began work on creating latex moulds of the four trackbearing slabs, and hundreds of digital photographs were taken to create highfidelity 3D computer models. Latex was then applied in layers for staff to be able to recover moulds.

The track-bearing rocks are from the coal-bearing Gates Formation and are about 100 million years old. The two larger blocks have surface areas of up to two square metres and a mass of approximately 5,000 kilograms each.

Mine staff are planning to move them from their current location to the museum, where they will be stored in the new collections building, which was specifically designed to house these types of large and heavy specimens.

“Teck is extremely proud of the collaborative relationships that have been established between our steelmaking coal operations and the palaeontological research community,” said Ray Proulx, Senior Coordinator of Community and Aboriginal Affairs at Quintette. “We are happy to have facilitated the identification and study of this significant find, which will help shed light on another chapter in our planet’s history.”

Of the discovery, Tumbler Ridge Mayor Don McPherson also commented, “The wonderful discovery by Kevin Sharman and the Tumbler Ridge Museum Foundation exemplifies the cooperation that Tumbler Ridge continues to enjoy with the industry that operates within our borders.”

Teck and BC Parks Foundation Partner to Support Natural Spaces Across B.C.