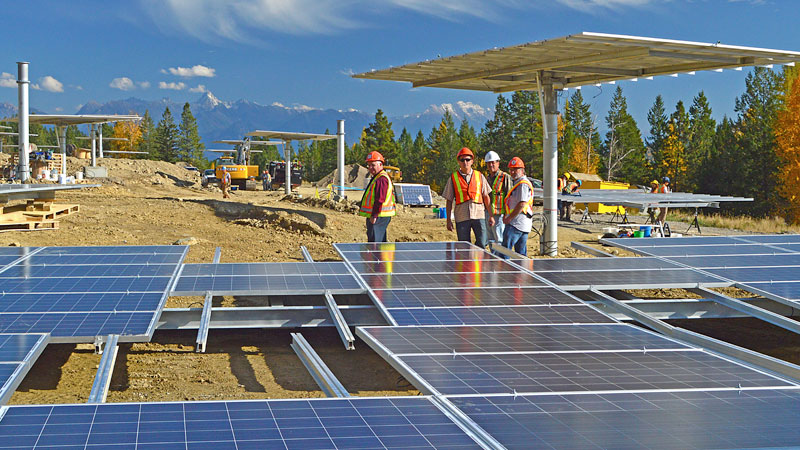 The future is bright for the city of Kimberley, located in southeastern British Columbia. On July 7, 2014, the City began construction on the $5.3 million SunMine solar project, Western Canada's largest solar-powered development, being built on the site of the former Sullivan mine with support from Teck.

A 1.05 megawatt solar power plant, SunMine will have more than 4,000 solar-cell modules mounted on 96 solar trackers that follow the sun’s movement, maximizing solar exposure. Once complete, it will be the first solar project in British Columbia to sell power to the BC Hydro grid.

SunMine is located on the site of Teck’s former Sullivan mine, which closed after more than 100 years of operations and has since been fully reclaimed. During its time, Sullivan mine was one of the world’s largest producers of zinc, lead and silver. In 2003, the British Columbia Technical and Research Committee on Reclamation recognized Sullivan mine with a Metal Mining Citation for outstanding achievement in mine reclamation. SunMine is community owned and capitalizes on Kimberley's clear and sunny conditions.

“The City of Kimberley is proud to achieve a number of firsts with this project; the interest and expectation from the community is high,” said City of Kimberley Mayor Don McCormick. “Once the SunMine confirms viability, a future expansion will drive opportunities beyond simply selling power to the BC Hydro grid.”

As part of our ongoing work to support the growth of Kimberley post-mining, Teck provided the land and site infrastructure for the project, and contributed $2 million towards its construction. The Vancouver-based EcoSmart Foundation conceived and supported the project; other funding partners include British Columbia's Innovative Clean Energy Fund, which provided $1 million, the Columbia Basin Trust, and Southern Interior Development Initiative Trust.

Upon completion, SunMine will be the largest solar facility west of Ontario, the first redevelopment of a reclaimed mine site into a solar farm in Canada, and the first utility-scale solar facility that is developed, owned and operated by a Canadian municipality.

“SunMine is an innovative use of a former mine site and an excellent example of a collaborative partnership supporting sustainable, vibrant communities,” said Don Lindsay, President and CEO, Teck. “Our interest in SunMine also reflects Teck’s commitment to alternative sources of energy.”

The SunMine project was constructed over the summer and fall months of 2014.