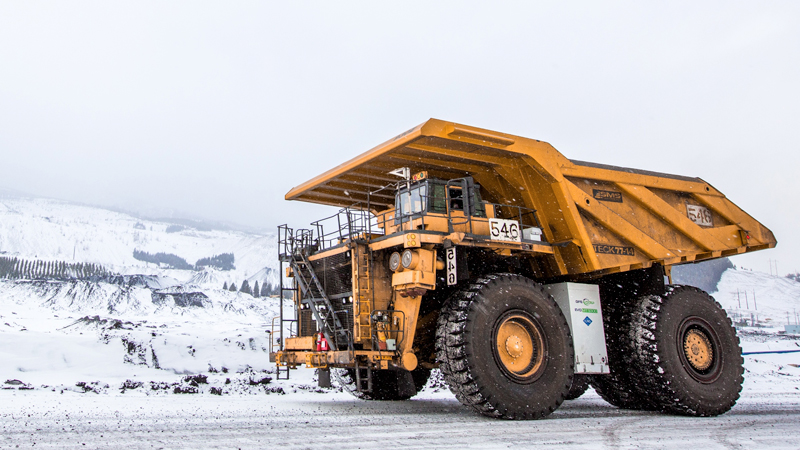 “LNG is a fuel source that has the potential to lower costs, significantly reduce emissions and improve environmental performance at our operations,” said Don Lindsay, President & CEO, Teck.

As part of our ongoing efforts to reduce C02 emissions and fuel costs, Teck has started piloting the use of liquefied natural gas (LNG) as a fuel source in six haul trucks at our Fording River Operations – marking the first use of LNG as a haul truck fuel at a Canadian mine site.

The use of blended LNG/diesel fuelled haul trucks has the potential for significant environmental benefits and cost savings. LNG produces virtually no particulate or sulphur dioxide emissions and reduces Greenhouse Gas (GHG) emissions by up to 20 percent in comparison to diesel alone. There is the potential to eliminate approximately 35,000 tonnes of CO2 emissions annually at Teck’s steelmaking coal operations and potentially reduce fuel costs by more than $20 million annually by adopting LNG and diesel hybrid fuel across the operations. FortisBC is transporting and supplying LNG to the mine site and is making a financial contribution towards the pilot.

The pilot is one of the steps Teck is taking to achieve its long-term target to reduce annual GHG emissions by 450,000 tonnes at its operations by 2030. To date, Teck has reduced annual emissions by 170,000 tonnes as the result of initiatives implemented since 2011.

“LNG is a fuel source that has the potential to lower costs, significantly reduce emissions and improve environmental performance at our operations,” said Don Lindsay, President & CEO, Teck. “We are committed to minimizing our own carbon footprint while at the same time continuing to provide the mining products that are essential to building a modern, low-carbon society.”

“Like British Columbia, Teck is a global leader in finding innovative ways to reduce GHG emissions while continuing to create opportunity,” said Premier Christy Clark. “It’s a concrete example of the difference clean-burning LNG can make in the fight against climate change.”

“Teck is demonstrating leadership by adopting natural gas as a cleaner and more cost-effective fuel solution for their operations,” said Michael Mulcahy, President and CEO, FortisBC. “LNG, as a vehicle fuel source, provides both an economic and environmental benefit to industry in our province. Today’s announcement further builds on the diversity of the more than 400 natural gas-fuelled vehicles in British Columbia.”

The pilot is expected to run until mid-year 2016 and will provide more information about the potential of using LNG more broadly across Teck’s haul truck fleet, creating the opportunity for further fleet conversions to LNG in the future.