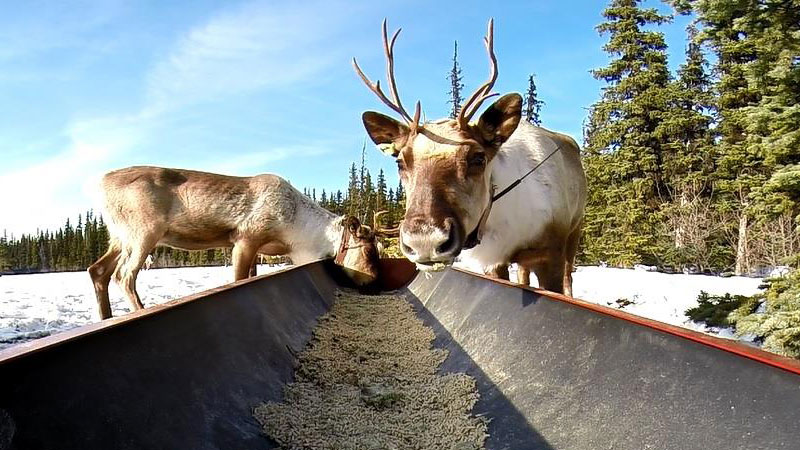 “By protecting pregnant cows and calves from excessive predation during the 2014 calving season, the team has demonstrated the viability of maternal penning to help bolster other vulnerable caribou populations in the South Peace region.” - Ray Proulx, Senior Coordinator, Community and Aboriginal Affairs, Teck

The Klinse-Za caribou herd in northeastern B.C., whose current range resides approximately 110 kilometres northwest of our former Quintette Operations, has only about two dozen individuals left in the population due to decades of excessive predation and other factors. The most critical window for survival and proliferation of the herd is the spring when caribou females, known as cows, give birth.

To encourage the recovery of this culturally significant herd we, alongside other regional industry proponents, partnered with West Moberly First Nations, Saulteau First Nations, Wildlife Infometrics and West Fraser Integrated Forestry to launch the Klinse-Za maternal penning project in March 2014.

The maternal penning program is guided by an advisory team that includes First Nations leaders and staff members, representatives from other caribou penning programs in B.C., a wildlife ecology and nutrition professor from the University of Northern British Columbia, game farm owners and representatives from the Province. There is also a technical team made up of First Nations traditional knowledge holders, regional wildlife biologists, veterinarians and First Nations shepherds.

Following an extensive population analysis, the team selected a group of cows in their third trimester of pregnancy and safely collected and transported them via helicopter to a remote, secure penning site. Once at the site, a team of shepherds protected the cows from predators, and cared for them during the term of their pregnancy and for four to six weeks after giving birth.

The shepherds assisted with the animals’ nutrition, and wildlife biologists outfitted the new calves with radio collars, allowing them to monitor the calves’ location and general well-being. From start to finish, the first installment of the maternal penning project was only four months long, but it was a critical time for the survival of the important Klinse-Za herd.

The Klinse-Za maternal penning project, which is the first of two penning projects tested in B.C. – the second occurred simultaneously in Revelstoke – has been carried out with the recommendation of the provincial government in support of ongoing caribou management in the region. The project is funded in part by both First Nations, with additional financial support from the government and industry sponsors, including Teck.

Our involvement in the maternal penning program started in 2011 when we met with the Saulteau First Nations to discuss a regional multi-stakeholder initiative to address the issue of declining caribou populations. During a series of workshops in 2012, the Peace Northern Caribou Committee (PNCC) was formed and its members identified maternal penning as a priority action.

“Teck is proud to support the Saulteau First Nations and the West Moberly First Nations in their maternal penning program,” said Ray Proulx, Senior Coordinator, Community and Aboriginal Affairs, Teck. “By protecting pregnant cows and calves from excessive predation during the 2014 calving season, their team has demonstrated the viability of maternal penning to help bolster other vulnerable caribou populations in the South Peace region.”

The second year of the maternal penning program started in March 2015 and is currently underway, with 11 healthy cows in an 8-hectare pen.