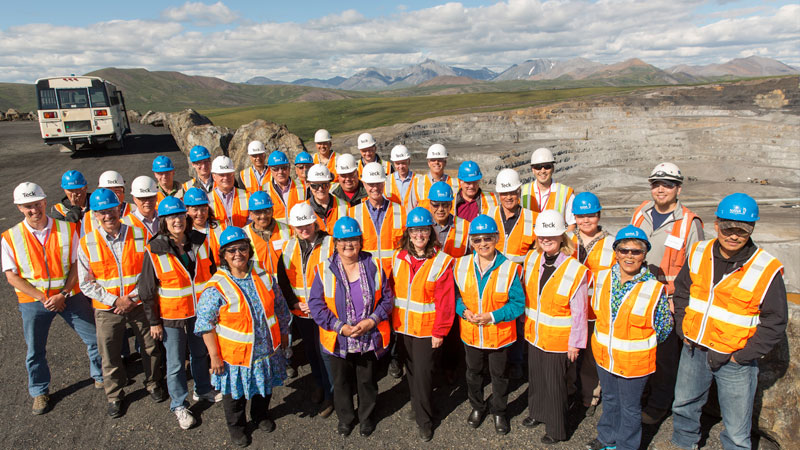 Twenty-five years after opening, the mine remains an economic engine for the communities of northwest Alaska – a positive example of Indigenous people and mining companies working together.

On July 14, 2014, Teck and NANA Regional Corporation marked the 25th anniversary of the opening of Red Dog.

Red Dog Operations, one of the world’s largest zinc mines, is located about 170 kilometres north of the Arctic Circle in northwest Alaska. The mine was created in 1989 through an innovative operating agreement between the operator Teck and the land-owner NANA, a Regional Alaska Native corporation owned by the Iñupiat people of northwest Alaska.

“The Red Dog partnership has set the standard for how resource development can create economic prosperity and opportunity while at the same time supporting tradition, culture and heritage,” said Don Lindsay, President and CEO, Teck, at the 25th anniversary celebration.

The deposit that became Red Dog Mine was first discovered by pilot and prospector Bob Baker in the late 1960s. Following the Alaska Native Claims Settlement Act of 1971, it came under ownership of NANA, a Regional Alaska Native corporation owned by the Iñupiat people of northwest Alaska. At the 1980 NANA Annual Shareholder Meeting, NANA shareholders decided to move forward with a plan to develop Red Dog Mine. Following extensive dialogue and consultation within the communities, and discussions with various companies interested in partnering to develop the mine, a development and operating agreement was reached on October 11, 1982, between NANA and Cominco, now Teck. This landmark agreement established provisions and commitments, which, to this day, still dictate how the mine is operated and ensure sustainable benefits for the region and its people.

The agreement signed in 1982 has created mutual benefits: for Teck, it created what has become one of the company’s most profitable operations; for the Iñupiat, it provided royalties and employment opportunities both at the mine and through NANA-owned contractors.

Since mining began, NANA has received $1 billion in proceeds from the mine, of which more than $617 million has been shared with other Alaska Native Regional and Village Corporations. In 2013 alone, Red Dog invested $137 million in the local and state economy, purchasing goods and services from Alaskan suppliers, with 47% of spending with Indigenous suppliers. Currently, 51% of employees at the mine are NANA shareholders.

To ensure the protection of subsistence, the 1982 agreement includes a provision for the creation of an independent Subsistence Advisory Committee, made up of residents from the communities of Noatak and Kivalina that meets regularly with NANA and Teck representatives to review all subsistence-related issues. This committee plays an important role in guiding subsistence protection activities at the mine and associated facilities. For example, because of winter freezing, there is a limited amount of time – about 100 days – where product from the mine can be transported out of the Arctic. That ice-free shipping season usually starts around July, which is near the end of the traditional Iñupiat marine hunting season. To ensure respect for the Iñupiat way of life, Red Dog will not allow a single ship into port until confirmation is received from the Iñupiat that their hunt has been completed for the year and permission is given to proceed.

On July 14, 2014, Red Dog employees and guests from NANA and Teck gathered at the mine to celebrate the anniversary of the 1989 opening. Twenty-five years after opening, the mine remains an economic engine for the communities of northwest Alaska – a positive example of Indigenous Peoples and mining companies working together.