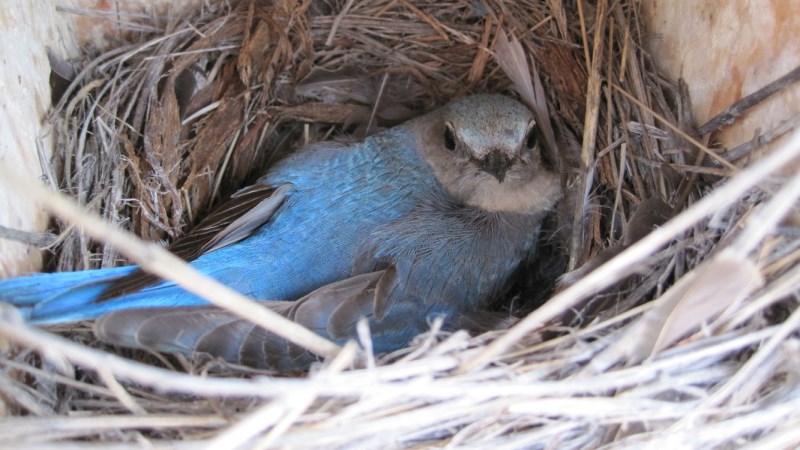 By 2011, a total of 252 nesting boxes were installed, and the percentage of boxes used by nesting bluebirds had increased to 19% that year.

For over a decade, Highland Valley Copper (HVC) Operations has been building nesting boxes for bluebirds in reclaimed areas of the mine site and conducting monitoring of the boxes and the birds who make them their homes.

The program, which is now heading into its eleventh year, has had a positive impact on mountain bluebird populations and reproductive success in the area. Future expansion is planned through collaboration with the University of Northern British Columbia (UNBC) Ecosystem Science and Management Program.

The mountain bluebird is one of three bluebird species that can be found in North America, and can be easily distinguished from other birds by the bright blue overall plumage of the males and the grey-blue plumage of the females, mainly on their wings. The birds prefer to breed in open grassy rangelands and will nest in pre-existing cavities or in nesting boxes (such as those offered by HVC), sometimes reusing the same box in subsequent years.

The program initially saw 81 nesting boxes installed at various areas around the mine site, of which 9% were used by the nesting bluebirds. By 2011, a total of 252 nesting boxes were installed, and the percentage of boxes used by nesting bluebirds had increased to 19% that year. Similarly, the rate of bluebirds reaching fledgling status – sufficient feathers and wing muscles for flight – has consistently trended upwards and, in 2011, was three times higher than in 2001.

Building on that success, the proposed partnership between HVC and UNBC’s Ecosystem Science and Management Program will include a comprehensive study to determine the factors influencing the increase in the population of mountain bluebirds, with the goal of identifying successful approaches to effective ecological impact assessment and mitigation. This knowledge can help contribute to our vision of achieving a net positive impact on biodiversity.

This story first appeared in our 2011 Sustainability Report.